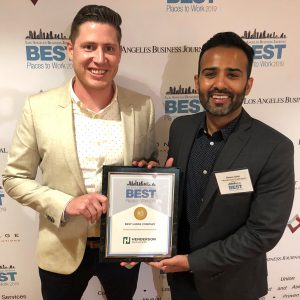 The Henderson Engineers office in Los Angeles earned Best Places to Work recognition from the Los Angeles Business Journal, the publication announced Monday. Henderson’s LA office – which is home to 37 full-time employees – opened in 2014 and was named the #3 Best Place to Work in the large company category, which is based on total company employees. The LA team provides expertise for a variety of markets, including aviation, higher education, K-12 education, mixed use, restaurant, retail, and venue.

“We’re thrilled that Henderson Engineers was ranked the third-best place to work in Los Angeles,” Director of Los Angeles Operations/Associate Vice President Austin Allen said. “We work hard to create a tight-knit atmosphere where our employees are treated like family and can perform to their full potential. This award wouldn’t be possible without the high level of character and team-first mentalities of our LA office staff members. We’re proud to represent the great reputation of Henderson Engineers across the country.”

The Los Angeles Best Places to Work program was designed to identify, recognize, and honor the best employers, benefiting the country’s economy, workforce, and businesses. Henderson qualified as a for-profit, privately-held business with a facility in Los Angeles employing more than 15 team members and having been in business longer than a year. The first part of the nomination process included evaluation of the firm’s workplace policies, practices, philosophy, systems, and demographics, accounting for 25% of the total evaluation. The remaining 75% consisted of an employee survey to measure the working culture.