Henderson Engineers is the Engineer of Record for Mechanical, Electrical, and Plumbing Design 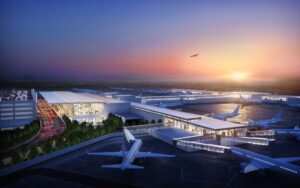 The ongoing construction of a new $1.5 billion single terminal at Kansas City International Airport (KCI) has reached a key milestone. Now halfway through completion, the four-year project is on time and on budget with an official opening slated for March 2023. Henderson Engineers is the engineer of record for mechanical, electrical, and plumbing design. The firm is also providing fire protection, security, and technology services.

At approximately 1,000,000 square feet, the single terminal will replace the airport’s current three-terminal layout. The consolidation into one building will enhance passenger experience as travelers gain access to airport services all under one roof.

KMBC-TV, Kansas City’s ABC affiliate, was on hand recently to capture footage of the redevelopment’s progress so far, which you can watch below.

Henderson’s work with KCI dates back to 1997. In the decades since, the firm has provided a variety of services to the airport, including aircraft noise measurements, lighting enhancements, and parking garage improvements.